SCWK has been monitoring four sites along the perennial reach of San Vicente Creek for about seven years. Numeric results derived from BacT and ecoli sampling may be compared to the NM State Water Quality Standards for Surface Waters (Attachment 1). In an informal agreement, NMED SWQB decided to allow access to their IDEXX equipment. Bacteriological samples can only be processed with NMED SWQB from Monday through Thursday and must be delivered during normal working hours within the prescribed holding time prior to final sample processing. Final numbers are read and recorded the next day so no sampling on Friday, Saturday, or Sunday, and no evening or night sampling is possible at this time.

SCWK Site 1 is the uppermost monitoring location and is located about 300 yards downstream of the confluence of Silva Creek and Pinos Altos Creek. At base flow, San Vicente Creek is usually dry at that confluence and is usually dry below the point where the old railroad bridge crossed the creek. Downstream of the perennial section it is called San Vicente Arroyo - a major tributary of the Mimbres River.  Site 1 is located just below the beginning of base flow in the perennial section. It represents the deeply incised channel in the old flood plain where Main Street was laid out then subsequently cut 30-40 ft over a period of 30-40 years beginning in the mid 1870s.  It is just upstream from the igneous rock exposed in the bottom of the Big Ditch where 6th Street once intersected Main Street.  The perennial reach is maintained from up-gradient shallow groundwater sources meeting a more impermeable body of igneous rock and flowing over it. Base or low flow is usually about 0.5 cubic feet per second (cfs) and water quality parameters at this site are generally more characteristic of groundwater with frequent low dissolved oxygen readings which may account for the lack of fish at this location. The public can easily access the inner channel of the Big Ditch at this location so that state standards for partial to full body immersion (secondary and primary contact designated uses) are applicable.  Thus Big Ditch Park (SCWK Site 1) was the only site to be sampled for total coliform and E. coli. The results are presented in Table 1. All other results for our typical streamside parameters are presented in the attached separate Excel file

SCWK Site 2 is located just east of the Hudson Street Bridge about 800 yards downstream of Site 1. It represents the end of the deeply incised flood plain and usually exhibits the best base flow water quality. In a 2002 water quality survey, NMED SWQB shocked and counted hundreds of small minnow-like fish which we believe were identified as long fin dace. Thus a viable warm water fishery exists through this reach from several hundred yards upstream of the site and on downstream past the next monitoring location. The gradient at this site is steeper, dissolved oxygen is generally high, and base flow rises to about 1 cfs.

SCWK Site 3 was established near the end of the base flow perennial section of San Vicente Creek and just downstream of the old smelter and an adjacent pile of mill tailings. It is a losing reach at base flow and will occasionally exhibit isolated pools with no connecting flow. It represents decreasing water quality due to decreasing flow. It also provided some opportunity to monitor the effect from storm water runoff from the tailing/smelter site. The mill tailings were targeted by SCWK for clean up and were reclaimed with funds NM Natural Resource Trustees received as compensation for groundwater loss to contamination.

SCWK Site 4 is the most recently established site. It is about 400 yards downstream of Site 2 and about 600 yards upstream of Site 3. It represents the lower gradient perennial section supporting the San Vicente Creek fishery. It proved handy too when construction to replace the Hudson Street Bridge denied our access. 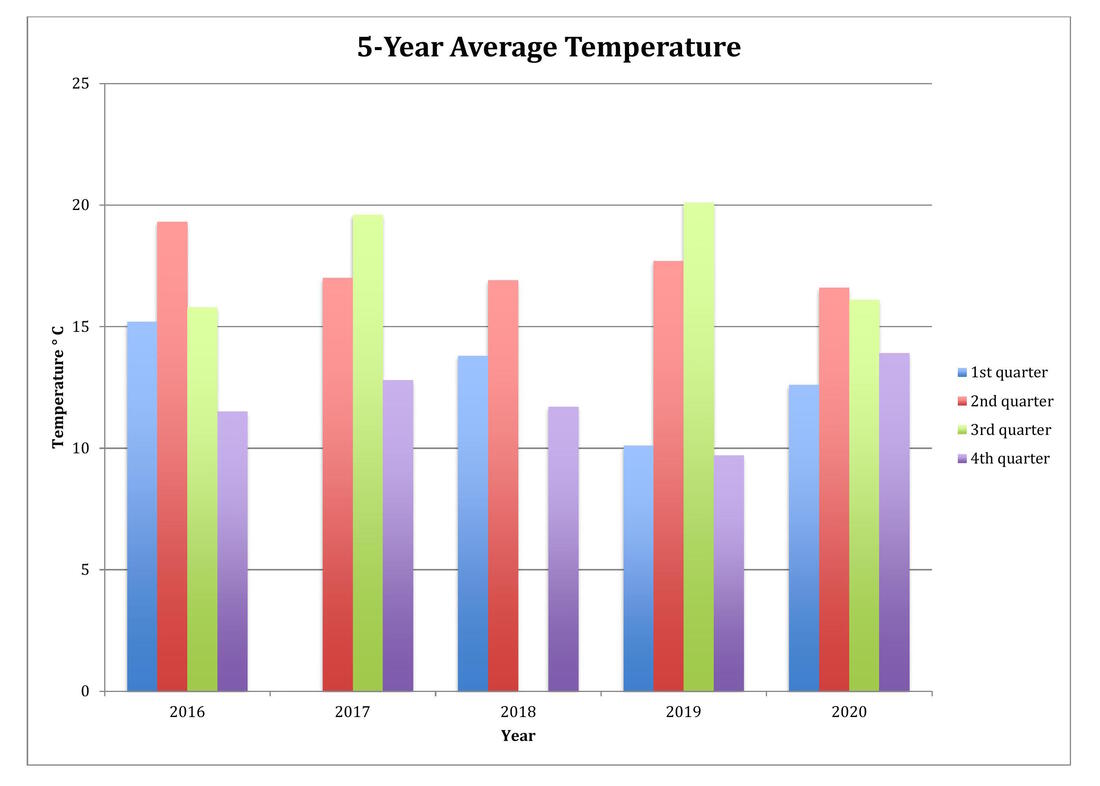 At flood flows, temperature will usually drop rapidly even during the hottest days when intense summer thunderstorms dump large volumes of cold fresh runoff into the creek. Even small summer floods starting far upstream will cause water temperature to decrease from Site 1 through all the other sites. Snow melt, rain on snow, and cold winter rains can also influence temperature, but not as much as summer runoff. 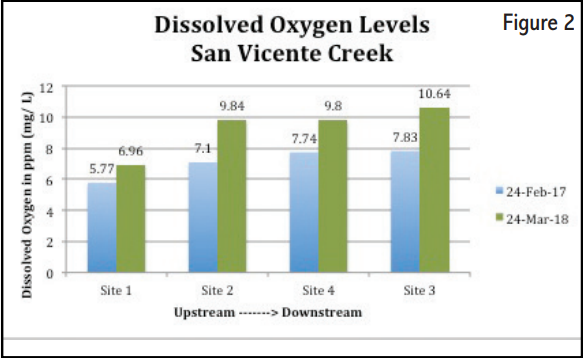 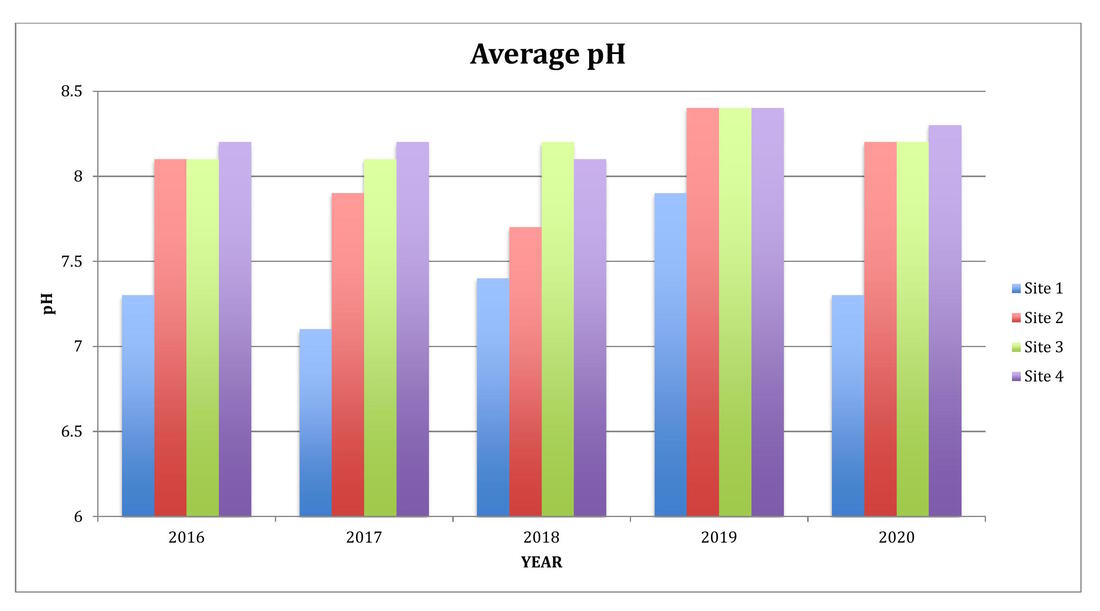 A pH of seven (7) is considered neutral; a pH lower than 7 is acidic, and higher than 7 is basic. A normal range for surface water is 6.5 to 8.5. pH is especially important in San Vicente Creek, because a drop in pH may indicate a source of water quality impairment somewhere in the watershed. 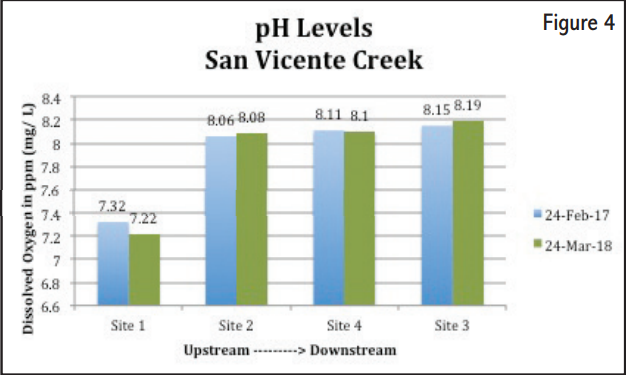 SCWK monitoring of pH at base flow sometimes shows an increase in downstream values related to changes in temperature and increasing DO concentration. The current base flow data is within an acceptable range. For flood flows, however, there is probably not enough data to draw any conclusions. 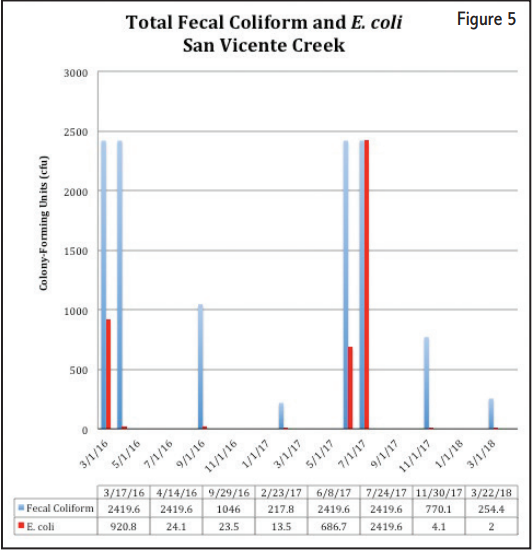 SCWK monitoring of fecal coliforms and E. coli show fluctuation within San Vicente Creek at Site 1. Pet waste and sewage leaks are two contributors to an increase in E. coli in San Vicente Creek. While an increase in fecal coliform is predictable after a rain event, it can also happen at low flow. In the chart above, the E. coli levels on June 8, 2017, were above the state surface water quality standard of 235 colony forming units (cfu) per 100 mL, but the flow was only slightly above average. On July 24, 2017, the E. coli levels were very high, likely because that sample was collected during a flood event.